It has been a while since you have visited my blog. It has been a while since I have visited my blog, too. Reason being, I had aspirations for this to be a travel blog. But ever since I turned 24, traveling hasn’t been as easy (read ‘cheap’) as it once was. Previously, I had the privilege of flying for less money, thanks to my father’s hard work for KLM. This privilege stops, however, after the age of 24. And as the world turns, I also get older. Which I see as a gift, by the way. Just not when it comes to flying privileges…

As such, I haven’t traveled as much as before. But it has given me the opportunity to really take in my surroundings with my feet on the ground 😉 Which is when wonderful things happen – I was invited to a Chinese wedding in a small town called Linyi. This is like a wedding, but those getting married are Chinese. I say this because I recently came across some very tasty food for thought. In the TED Radio Hour podcast I listened to the episode titled  ‘The Person You Become‘, and in this episode 5 people discussed their lives and how it links to their identity. One author in particular, Taiye Selasi struck a deep chord within me, when she said that “How can I come from a nation? How can a human being come from a concept?” She discusses how people when asked where they are from are boxed and labeled with identity and personality after they answer this question.

… and all its bells…

I found this interesting because a couple of years ago I noticed I did and still do the same thing. Referring to people by their nationality that in my mind justifies certain attitudes and mindsets, whereas that’s really just a product of culture and environment. (Or so I think.) This is the main reason why going to this wedding was so eye opening for me. As I was sitting there with all my senses triggered, I kept thinking that if I were to marry a Chinese man, I’d feel the need to inform my Western friends and family prior to the wedding of what they’re about to witness. After the wedding finished, I concluded I’d just tell them to enjoy the ride, and please don’t be so judgemental. The difference is not harmful, it’s merely different.

I counted 5 different songs were played during the ceremony. Paused and changed at any given moment. I knew some of the songs, from romantic Hollywood movies. The bride and the groom looked beautiful, and wore a warm smile as their most eye catching accessory. The parents of the couple were given a sip of tea, I am not sure what the function of that was, but they were all content with its sweetness. The MC of the wedding had a beautiful voice and it was very pleasant to listen to him although I didn’t really understand what he was saying. 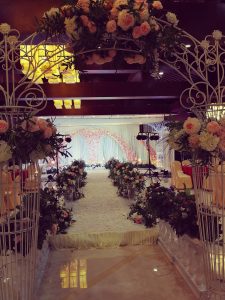 You know that moment when you are hungry and you go either grocery shopping or out for food and you buy WAY too much? The lunch that followed the ceremony was about that. The first horizontal layer on the table I thought to myself ‘wow, that is a lot of food.’ 😀 . They were happily eating and chatting and I was happily tasting and trying to listen, when more food came and constructed the second horizontal layer of food. Stacked on top of the first layer of unfinished plates. ‘Haha, wow, this is really a lot of food.’ At this point, one’s chopstick skills are truly tested as you have to bend them in such a way to reach the first layer of plates to get a piece of chicken, fish or rice and manoeuvre your way out of the Jenga without dropping your bite. Because then it’s really gone into the abyss of unknown flavours.
And then came the third layer…

And of course there is the alcohol that plays an important role in many occasions in China. I am not a fan of Chinese White Wine (白酒 bai jiu) because of its strong odour and flavour. There’s no escaping it, though, unless you have a doctor’s order stating you’re not allowed to consume alcohol. Luckily this brand was not as bad as I remembered from previous Bai Jiu experiences and it was rather enjoyable. We cheers every time before taking a sip. To friendship, to new friendship, to weddings, to happiness, to welcoming in China. And then to the bride and groom. Who pass every table and cheers with the people who will wish them well and prosperity. They themselves don’t drink, I’m sure you wouldn’t survive that, but they will feed you 2 or 4 glasses of Bai Jiu depending on your ability or courage. If you have both, then I salute you.

Generally, watermelon is not the first fruit I’d pick of the shelves. I’m more of a mango person. But I have consumed so much watermelon during these wedding days and the following trip to Qingdao, I’m afraid that old joke of ‘growing a watermelon inside your tummy if you eat the seeds’ might become a reality somehow. For every occasion, at any time of day, there was always watermelon. Like an old friend that you have deep conversations with.

And now this is funny, where cultural differences come to play and I realised that although me and my Chinese counterparts grew up very differently, neither of us is necessarily right or wrong. When I was younger, I was taught not to slurp. EVER. This is one of the complaints I hear about the most often when people think of Chinese culture. “But they slurp when they eat!” Have you ever tried eating a watery watermelon with all its seeds above a bin and no tissues, towels, or showers around? If only I had the courage to slurp. Which in my mind was gross. I had watermelon on my entire face, my arms, my legs, my feet, the couch, and the ground. It wasn’t my house, either. While the rest of them were slurping, at least they were clean and not super sticky and gross.

I can’t say the same about the floors at the wedding after the lunch, though. Everything that was once on the table, now lay like a dirty halo around the tables. Cigarettes, both glass and plastic bottles, bones of all the animals fed to us, unwanted leftover juice, unwanted leftover bai jiu, and some other unidentified objects. At first I thought ‘yuck!’ and actually wanted to take a picture to show you all. But then I looked around me, and nobody cared less about the filthy floors. Not because they enjoy making a mess, but simply because that’s what they’re used to doing. Sure, we can keep things clean and neat and put in a bit of effort. But if we don’t, so what? (I don’t mean ‘go litter the oceans!!’ But maybe often worrying about everything looking spotless turns us into such nit-picky people who can’t accept imperfections.) Let me tell you, though, the place looked perfectly clean when we entered. My parents always say, “don’t take everything so seriously.” And I didn’t. I walked away from the wedding with a happy stomach, beautiful gained experiences, new acquaintances, and a sense of accomplishment.

2 Replies to “Weddings and Watermelon”